November 02, 2022
Leaving behind the hectic Hanoi, I arrived in a piece of paradise on Earth, Cat Ba Island. Rugged, craggy and jungle clad, Cat Ba is the largest island in Ha Long Bay. Almost half of Cat Ba Island (with a total area of 345 sq km) and 90 sq km of the adjacent waters were declared a national park in 1986 to protect the island's diverse ecosystems.

From Hanoi I've arranged a direct bus ride with Daiichi Travel. The ticket was 280000 VNĐ (~12EUR). They picked me up from the hotel. Funny thing, one guy from the agency came to pick me up with the motorbike to the bus. It was a crazy ride on the hectic Saturday morning on Hanoi's streets. I don't want to imagine how it would have been if I had a trolley instead of a backpack. Anyway, the bus ran to the wharf on the island of Cat Hai, lashed to Hi Phong by bridge. From there we took a short ferry ride to Cat Ba Island to continue by minibus to Cat Ba Town. They dropped me in front of my hotel. The entire journey took 3h30.

After the checkin I took some time to contemplate the view from my room balcony. Not that I'm bragging but the photo above was my view. Then I needed to take of two business: eat and take my clothes to laundry. I'll start with the last. I found on google maps a laundry that had mostly positive reviews and I thought it can't happen to me what happened to the people who left negative reviews. Oh well, they lost me a t-shirt and almost gave me a pair of male shorts. I mean, I know my backpack is a little bit overweighted and I could loose some weight but still. Oh well, now I have a good reason to treat myself with a new t-shirt.

I jumped too much ahead. Going back to the first day, after leaving the clothes to laundry, I stopped at a nice place to have lunch.

After the filling lunch, I went exploring the island, especially the beaches.The water was slightly cold and by the time I got there the sun was setting down behind the karsts. I just enjoyed the last couple of sun rays, reading on my kindle. From there I followed a walking trail, cut into the cliff. This trail offered me gorgeous sea views and winded its way to Cat Co 3 Beach.

For dinner I went on one of the most recommended restaurants on the island and tried a seafood dish.
For my second day on the island I've booked a half day trekking with one of the tours recommended in the Vietnam Lonely Planet guide (I've got one some time ago to guide me during this trip). I really enjoyed the experience provided by Cat Ba Ventures. I booked with them also a 2 days/1 night boat trip in Lan Ha Bay - Ha Long Bay, and the bus to Ninh Binh (my next stop afterwards) and it costed me ~170EUR.
Going back to the trekking, I went for the morning one. What I liked was that the group was small (5 people) and we had a really funny local guide. They took us with a car to the entrance to the Cat Ba National Park. From there we had a 2h trek trough Kim Giao forest (which provides the wood for the chopsticks) to the top of Ngu Lam mountain where we saw breathtaking views of valleys.
It's possible to go on your own too. At the park entrance you can get all the info needed. I felt more comfortable having a local guide and doing it in a group. This way I interacted with locals and foreigners and also learned some information about the area.

The trek was accessible. More sturdy shoes would have helped with the climb of steep slopes. In the tour was included also the visit to two caves: Trung Trang Cave and Hospital Cave.Trung Trang Cave is a narrow cave with a length of over 300 m. Over millions of years of geological tectonics, this cave owns thousands of natural stalactites with unique shapes, evoking visitors' imagination.

Hospital Cave served both as a secret bomb-proof hospital during the American War and as a safe house for Viet Cong (VC) leaders. Built between 1963 and 1965 (with assistance from China), this well-constructed three-storey feat of engineering was in constant use until 1975. The cave spans 17 rooms, including an operating theatre and a huge cavern that was used as cinema.

We got back to two right on time for a well deserved lunch.

After lunch I went to find the third beach Cat Co 2 but it didn't make an impression on me so I went back to the first one and spent there the afternoon.
There was one more place I wanted to visit on the island and that was Canon Fort. It's been advertised as one of the best spots for astounding panoramas of Cat Ba Island's jungle-clad hills, the harbour and the karst-punctuated sea. I'm not sure if I got to see everything it had to offer because it was getting darker and it looked quite deserted. Anyway, I did mange to get some nice views. The entrance costed me 40000 VNĐ (~2EUR). This place was built in 1920 by the Vietnam Army.

On the third day I boarded the Cat Ba Ventures boat for 2 days/1 night trip to Lan Ha Bay - Ha Long Bay. This boat trip was amazing, especially because it was on my birthday and the organisers surprised me with a beautiful flower bouquet and a delicious cake to share it with the entire boat. Funny thing, on the boat there was another guy who was celebrating his birthday. I highly recommend Cat Ba Ventures for their tours. On this boat trip I was on the solo travellers boat and in total we were 6, everyone from a different country.

The food on the boat was amazing! A lot of variety, fish, meat, vegetarian. After lunch we went kayaking for 1.5-2h. 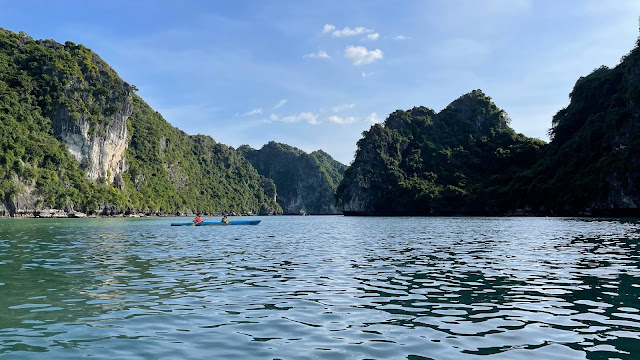 We explored a couple of caves in Ha Long Bay.

Before the lunch on the second day we had 1h for swimming to the small beach bellow. I'm still not comfortable with swimming in deep water but that didn't prevent me from not giving it a try (with life jacket). 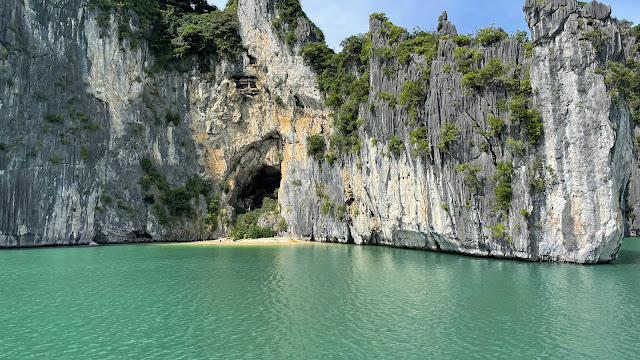 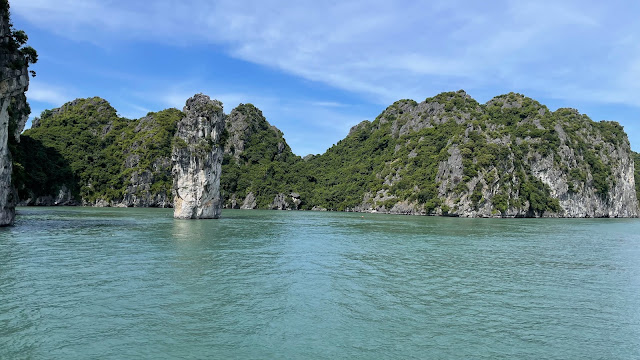 The last couple of days were truly marvellous. It was difficult to depart from this amazing place. After the boat trip I took a bus towards Ninh Binh, a mesmerising area known locally as "Ha Long Bay on Land" thanks to its magical riverine landscape, with sheer limestone mountains rising up from the paddies.