November 03, 2022
It was difficult to depart from Cat Ba Island but the show must go on! After the boat trip I jumped in a bus that dropped me off at my hotel in Ninh Binh City. Bustling Ninh Binh City is lacking in sights and not a destination in itself, but it makes a decent base for exploring some quintessentially Vietnamese limestone scenery close by. In retrospective it would have been better to book accommodation in Tam Coc village, but I was running out of cash and on the blogs I've read there weren't ATM's there (although when I got there the next day I saw a lot of signs with ATM machines, but can't tell if they were the real deal; I've read on other blogs that in many remote places they advertise ATM machines but they actually charge your card, add some fee and give you cash). Another reason for me to stay in the city was that I didn't know where the bus will drop me. I should have asked... The bus stopped first in Tam Coc and then in the city. Anyway, I spent here 2 nights / 1 full day and I managed to see some highlights of the area.From the city I took a taxi to get to Tam Coc. The ride was 100000₫ (~4EUR). I went there early in the morning to avoid the crowds coming from Hanoi on day tours. Once I got in the village I went to the ticket office to take a boat trip. I had to paid 270000₫(~11EUR) because I was by myself. For two persons is 300000₫. I waited a couple of minutes to see if another solo traveller was coming but no one showed up while I was there and I was impatient to keep waiting.
The boat trip took around 1h. The boat trip boasts surreal karst beauty along the Ngo Dong River. Rowers use their feet to propel the oars, as the route negotiates Tam Coc's three caves. The name Tam Coc derives from old Chinese: Tam (three) Coc (caves). Whoever wakes up in the morning goes far away (Romanian quote). I was blessed with enjoying this beauty while it was quiet. On my way back more boats were passing by. 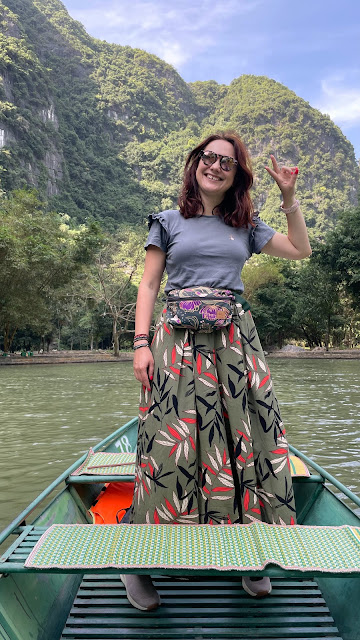 After the boat trip I rented a bike and cycled through rice paddies (now they were harvested) to get to Mua Cave. The name means "Cave of Dance". What makes Mua Cave a must in Ninh Binh province is the panoramic view from the peak above. A stone staircase beside the cave entrance zigzags through the karst and it's almost 500 steps to a simple altar to Quan The Am Bo Tat (the Goddess of Mercy).
From Tam Coc to Mua Cave I've selected on Google Maps walking route and cycled using that route. The way there wasn't very spectacular, maybe during the spring or summer it's more impressive. 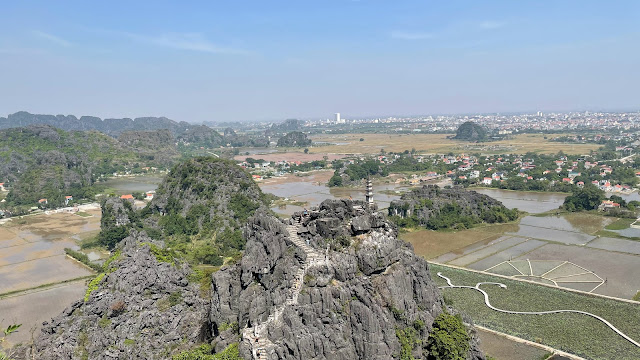 While I was climbing down from Mua Cave view point I heard someone say, climbing up hearts my lungs, climbing down hurts even more my knees. I agree with that. After all the effort it was time for a well deserved lunch.
There were more things to explore in the area but I've got some sun rash on my arms and I decide to call it a day.
My next stop on my 3-week itinerary in Vietnam is graceful, historic Hoi An, Vietnam's most atmospheric and delightful town.