October 28, 2022
Hanoi is the starting point of my 3-weeks adventure in Vietnam. This will be my longest solo trip so far. In my previous trips to South East Asia I went for multi-country itinerary. This time I'm focusing only on discovering Vietnam.
I have reserved to stay in Hanoi 3 nights and I have basically 2 full days to explore what the city has to offer.
In the first night of my arrival I just went out to grab something to eat. I was too tired to do anything else.
All I knew about Vietnamese food before coming here was the famous pho, fresh spring noodles and egg coffee. I plan to try as much of the local flavours I can have. I have started with cha ca, which is an iconic Hanoi fish dish heavy on turmeric and dill. To my surprise, I had to make fresh spring rolls with all the ingredients I got. Sometimes it happens that I have no idea how to eat the food in front me. Luckily at this restaurant, a staff member demoed what I needed to do.
The next day I explored the Old Quarter. Hanoi's historic heart, the Old Quarter is home to over 1000 years of trade, commerce and activity, with no signs of slowing down. 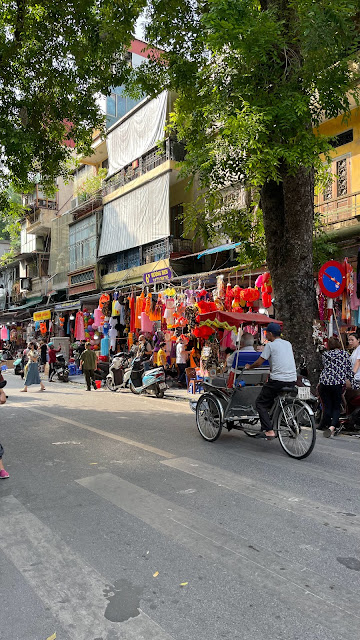 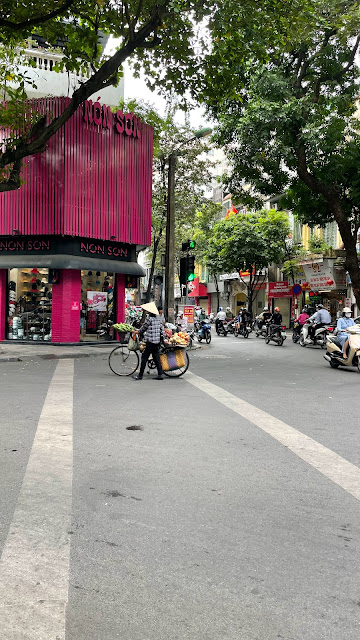 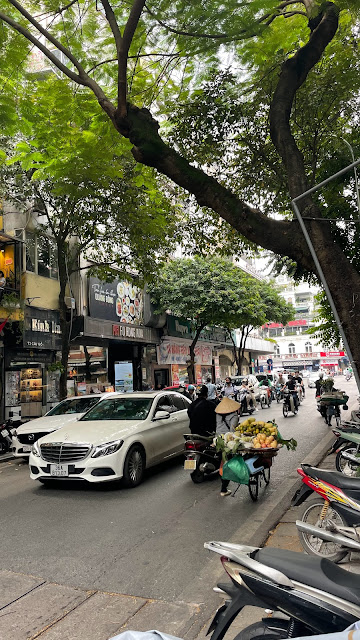 Being a pedestrian in this area is a real challenge. The sidewalks are narrow and claimed by the parked scooters and motorbikes. The only chance is to walk on the street and avoid the cars, scooters, bikes and motorbikes. If that's not hard enough, crossing the street is the most challenging part! It's possible, the only thing I need to do is to be confident, look forward, start walking and don't stop suddenly. With a bit of practice I've got the hang of it, at least if I'm not tired.
The streets uproar never ends but this is what makes the city feel alive!

A visit to Hanoi can't go without trying the famous egg coffee in the place where it was created.
Egg coffee first hatched (pun intended) in 1946 in Hanoi, Vietnam. An individual by the name of Giang worked at the Metropole Hotel as a bartender. During this time, it was unusual for locals to work for foreign companies, but Giang was a real go-getter. He was passionate and very talented in his pursuits; so when a milk shortage struck Vietnam, he figured out that creamy egg yolks and sugar would make a perfect substitute.
Giang then started making the curious concoction for hotel guests and they LOVED it! Soon, word got around of his talent, and he left his job at the Metropole to open a small coffee shop serving his now famous Vietnamese egg coffee (ca phe trung).
To continue the food tour, for a quick bite to get my energy level up, I tried bahn mi sandwich. It was delicious and exactly what I needed to continue my stroll. 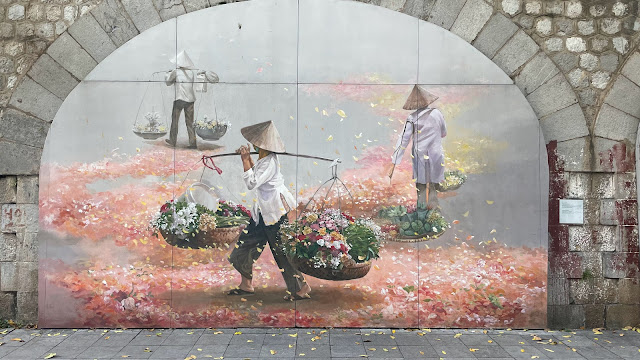 In case you haven't noticed I'm taking seriously the food experience.
Pho is often eaten at breakfast, but nowadays you can have it at any time of the day. I had it for dinner.
On my way back to the accommodation I wandered on Ta Hien Beer Street.

Popularly known as the 'International Intersection', the Ta Hien Street in Hanoi is where the western culture meets the eastern. Foreigners and tourists come to this place quite often. A beer and food heaven, this crowded street is full of small alleyways with luxury restaurants, sidewalk shops and local vendors selling affordable beer and delicious Vietnamese dishes.
I've started my second day in Hanoi at Hanoi Coffee Station to have breakfast and some coffee. This time I've tried another speciality. Vietnam has a rich coffee heritage and the ‘Phin’ (filter) is a key element in the Vietnamese way of enjoying coffee. Roast and ground coffee is placed into the metal filter that sits over a cup collecting the rich coffee liquid slowly dripping down.
Full of energy after the breakfast and this amazing coffee I headed to Vietnamese Women's Museum. This excellent and highly informative museum showcases the roles of women in Vietnamese society and culture. Labelled in English and French, exhibits cover everything from marriage customs to childbirth, but it’s the memories of the wartime contribution by individual heroic women that are most poignant. If the glut of information sometimes feels repetitive, for visual stimulation there is a stunning collection of propaganda posters, as well as costumes, tribal basketware and fabric motifs from Vietnam’s ethnic minority groups.After the visit to the museum I had arranged to join a free walking tour to discover the Old Quarter with a local student guide. The first stop on the tour was at the Heritage House, a small house built at the end of 19th century. Shopkeepers' families lived there successively until 1945, when a family bought it to sell Chinese medicine.From this place we went to Bach Ma temple. Located in the heart of Hanoi Old Quarter, Bach Ma Temple is regarded as a remarkable historical monument associated with the event of King Ly Thai To’s capital relocation. It stands among the Four Guarding Temples of Thang Long Citadel which were established to form an enclosing boundary of strongholds around the city and deal with potential threats.
Formerly, the temple was named Lon Do. Then, it was changed to Bach Ma to tell the story of King Ly Thai To’s relocating the imperial capital from Hoa Lu to Thang Long (Hanoi nowadays) in 1010 AD.
Plenty of historical records say that the King kept failing in his attempt to build the new citadel without any clear explanations. Only when he got his courtier to pray did he notice a white horse coming out of the Lon Do temple, wandering and leaving tracks on the ground before vanishing. From that moment, Ly Thai To ordered to build the citadel walls alongside of the marked tracks and succeeded in moving forward till completion. Since then, he decided to change the name of Lon Do Temple to Bach Ma (meaning “white horse”).
Another highlight of the tour was the house where Ho Chi Minh stayed from August 23, 1945 to read the Declaration of Independence marking the foundation of the Democratic Republic of Vietnam, now the Socialist Republic of Vietnam, on September 2 the same year.
I have booked the tour with Hanoi Free Walking Tours, a non-profit organization established in 2012 by a group of students in Hanoi who wanted to improve their English skills. It was a great opportunity for me to interact with other fellow travellers, local students and learn more about the Vietnamese culture.
After the tour I was starving so I went to try another Vietnamese dish, banh cuon, steamed rice crepes with minced pork, mushrooms and shrimp. It sounded delicious, and it was, but not that fulfilling. This makes it a good appetiser.
There are still a couple of other sights to discover in Hanoi but my time here is up. My next destination is Cat Ba island.