After reading Dan Brown's Inferno I wanted to go to Florence! That was two years ago and I had booked a trip for March 2020 but it was canceled due to the pandemic. This year I booked another trip for March, but that one got canceled too because I got covid. One month later I finally managed to visit Florence, but the plan doesn't always works out the way one expects. 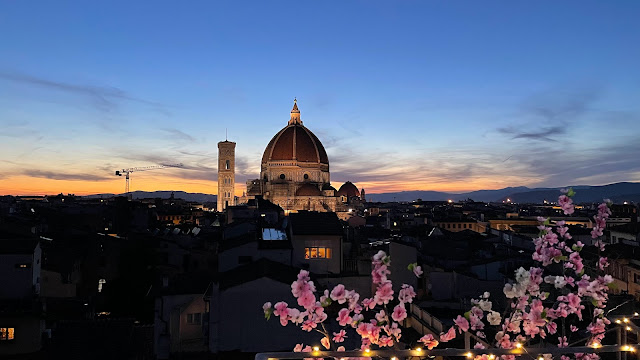 Initially the trip was for 3 nights but the airline with which I got the flight tickets changed the timetable and the first direct flight to return was after another 2 days, therefore I ended up spending 5 nights. Which turned out to be better!

The journey to reach Florence was hellish! Apparently the airport is small, between cities, with only one runway, fairly short and not very wide. Additionally to that, the place is surrounded by high mountains, which is why it can be approached only in one direction. Not only does the terrain brings this challenge with it, but it also effectuates in a very unusual microclimate. Due to this, the airport can be approached with a tailwind component. After leaving with a delay of ~3h from Amsterdam, that evening, the wind made it difficult to land on FLR, the runaway in Pisa was busy, therefore we landed in Bologna. The whole experience was scary. What helped me manage the discomfort was listening to my neighbour talking. This way I didn't notice the other people around getting sick. Anyway, from Bologna airport we managed to board one of the transfer buses which took us to the original destination airport.

From the airport we took a taxi straight to the accommodation and only after that we were able to start enjoying what Florence had to offer.

Although it was late, we enjoyed a delicious dinner at a restaurant in the area.

The food was good, we were also starving! For starters we shared some bruschetta. The main was mezzelune stuffed with some soft cheese bathed in a butter sauce. And for desert the traditional tiramisu.
The next day we started with a lunch with one of Ioana's friend who leaves near Florence. The food was amazing.  After lunch we started exploring the city.

Over the Ponte Vecchio passes the Vasari Corridor which was designed by Giorgio Vasari for Grand Duke Cosimo I de’ Medici, to connect Palazzo Vecchio with the Pitti Palace. At the moment the corridor is closed to the visitors.
Speaking of the Palazzo Vecchio, below is the fountain with a copy of Plutto with dolphin by Andrea del Verrocchio. The original statue is in the palazzo.
I returned in the next days to visit the palazzo. Unfortunately for Pitti palace I didn't have time and patience to queue to visit it.
Now seriously, it was time for dinner.The dinner was a feast! We shared again some bruschetta for starters. For the main, I got gnocchi with gorgonzola sauce and walnuts and Ioana had some truffle risotto. And for desert I got a cheesecake and Ioana, tiramisu. The wine was also exquisite! It was a Brunello di Montalcino. I forgot to mention, the wine from first night was Chianti. I returned here for my last evening in Florence!
If you think the night was over here, you're wrong my friend! Ioana's friend made us reservations to a speakeasy. It was the first time going to such a place. If you are in Florence you definitely have to try it. It's called Vanilla Club. The rules are simple and you just have to play the game in order to get in. We had to wait ~20 minutes to get in but it was worth it. The ambiance inside depicts 20'-30's. The cocktails were amazing too! 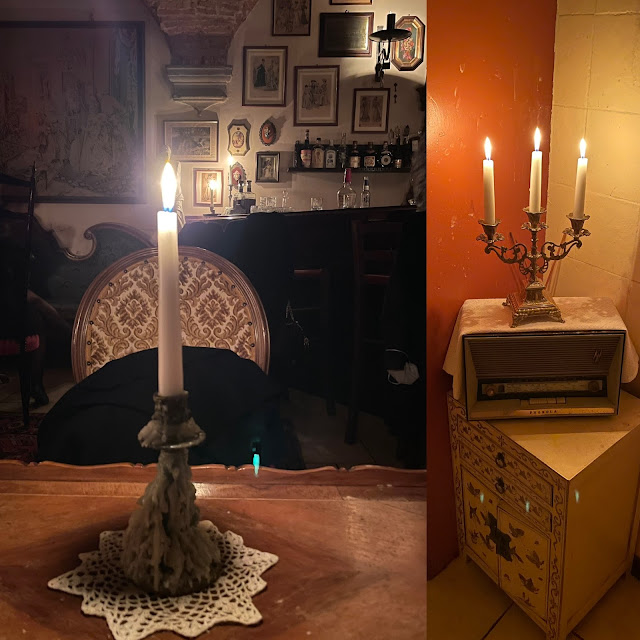 The next day we started over: eat, walk and repeat. The best things in life are worth waiting for, like it was with us waiting ~20 minutes to get a table at a popular brunch spot. Waiting can be difficult when you're hangry!After we ate we went for a carousel ride in Piazza della Repubblica.After the carousel ride we started walking towards Piazzale Michelangelo. From this spot we had a panoramic view over the city. Sometimes, for the best things in life some effort is required. For this panoramic view we had to climb some stairs.
It was definitely worth it. Do you believe in coincidences? Until this point we met randomly with two persons who were at the same speakeasy as us. Funny, no?
From the piazza we went towards the Giardino delle Rose, terraced rose gardens with beautiful city views. The weather was splendid and the garden was busy with people enjoying it!
From the garden we headed back to the accommodation. Ioana returned to Amsterdam that evening and I had to check in to another accommodation I booked for the rest of the stay in Florence. I almost missed the checkin. After I finally managed to checkin, I got a good recommendation for dinner.
After dinner, I returned to my room and decided to have a tea before going to bed. Oh well, it didn't occur to me to get the key with me and I locked myself out. And that's how "enter" the room game began. I knocked at my neighbours door, a lovely Spanish couple, and they called the lady from reception (I left my phone in the room) who was sending us instructions how to find the spare key. Eventually we found the spare key and I was able to enter the room again!
For the next day I went to visit Palazzo Vecchio and booked a yoga class on a rooftop terrace with amazing views over the city.

At the entrance of Palazzo Vecchio, the statues of David, Hercules and Perseus stand guard.

Coincidence that the rest of the statues are from stone?!

If you read Inferno by Dan Brown or viewed the movie with the same name, this room will be familiar with you. When I stepped inside I felt I was inside the universe of Dan Brown.

Now you understand me why I had to visit Florence?


As I mentioned earlier I took also a sunset yoga class on a rooftop terrace. The two pictures above were taken from that place. The experience itself wasn't extraordinary but it was worth it for the 360 views over the city.
A new day started with a breakfast!
After a good coffee and breakfast I headed to Uffizi Gallery. Thank God I booked a ticket online. Although I had to pay extra for the reservation it was worth it otherwise I would have stayed in two gigantic queues, one to buy the ticket and the second one to enter the museum for ticket holders.

There are corridors full with statues from ancient times to the present days.

You can easily spend a couple of hours in Uffizi Gallery admiring the vast collection of primitive and renaissance paintings and masterpieces.

I returned to Giardino delle Rose to enjoy my panini and rest my feet. 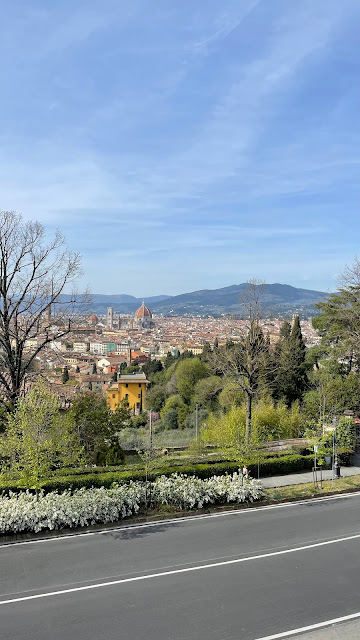 After a well deserved break in the garden, I headed towards the Piazzale Michelangelo and climbed up Viale Galileo and then down on Viale Machiaveli to Porta Romana.
After this walking it was time for a gelato! This was one of the best ones I had in Florence. I've got strawberry with ginger and zabaione (an Italian dessert made with egg yolks, sugar and sweet wine)  flavour. Delicious!
Before dinner, I still had plenty of time to stroll down the streets of the city.


I discovered too late Mercato Centrale. At the first floor there is a food court with a lot of delicious meals.

One last dinner in Florence, at Mato Mato restaurant! I think that was the best tiramisu I ever had. 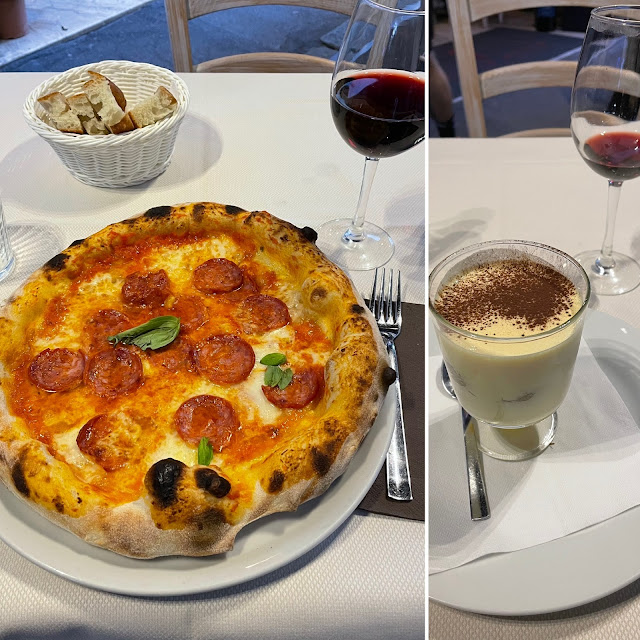 That was my florentine experience! The city is a living history and art and it's just one of the Tuscany gems.
Arrivederci amici!