Another rendezvous in Paris

It's been a long time since I posted anything here. The most obvious reason is the pandemic, but despite that, in the past year, I was still able to travel, mostly within Netherlands, but couldn't find the drive to share that. Maybe I'll do it in the next months. I've discovered a lot of hidden gems in Netherlands that are worth sharing with you.

Anyway, this post is about my most recent visit to Paris! 7 years ago I went to Paris for the first time. Back then I had to choose between doing the trip I planned to Paris or take the exam to enter a master programme. I chose the first one and I have no regrets regarding the path I followed. Now, what brought me to Paris was my brother's birthday. He wanted to celebrate his birthday in Paris and I decided to join him. Now he owes me haha. He promised to join my 30th birthday this years in South-East Asia (that's where I would like to celebrate it). 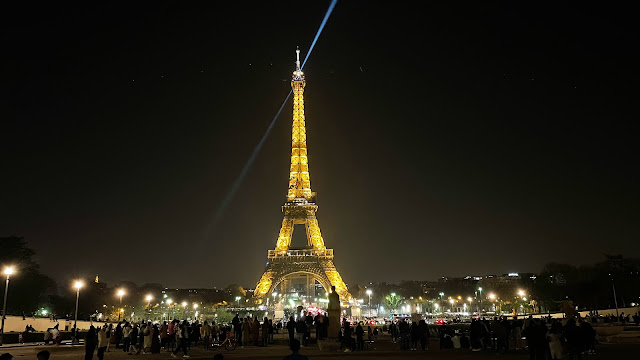 I stayed for 3 nights (4 full days) and he stayed one more night. To get there, I took the Thalys train (door to door is faster than by plane, it's not cheaper than the plane, it's more sustainable). Within 3h30 I was boarding off in Paris Gare du Nord. My brother came from Bucharest and he arrived later that day.

The first afternoon I've spent it around Montmartre district. This district is a charming hilltop with sweeping views from its steep. It used to be the artists' village, once inhabited by Picasso and Dali, and the home of the domed Sacré-Cœur basilica (tip: the entrance is free).

With the pandemic wearing off, also the tourist return!
While in Montmartre, Place du Tertre is a bustling cobbled square and hangout place for buskers and artists painting visitors' portraits. Thank you Adela for sharing this location with us!
In the neighbourhood we went two days in a row for breakfast. First at Papilles Coffeehouse & Restaurant
and second time at Buvette Paris. Thank you Alex for these amazing recommendations.
Going back to my storyline, to finish with Montmartre district, I've walked in the cemetery with the same name. It might sound sinister, but Paris cemeteries are quite famous. And on the plus side, if you're looking for a quiet place this is your spot. I wonder why haha?!
Too creepy? Leaving behind Montmartre, I went for dinner to a Korean restaurant. My brother threatened me that we will have only French meals, so I took advantage to check out without him a place recommended by Edi. It was one of the best bibimbap's I had so far and after that meal I had only French dishes!
On the second day, we started with brunch at the first place I've mentioned above and strolled again in Montmartre with my brother. From there we headed to Arc de Triomphe where we had tickets to visit it.
Tip #1: buy tickets online for everything you want to visit. It saved us a lot of queueing time.
Tip #2: most of the attractions have free entrance for those under 18 and 18 to 25 nationals and/or residents of EU.
From the top of the panoramic terrace your eyes sweep over the whole Paris.Its architect was inspired by the Roman Arch of Titus in a single arch, but went beyond it by exceptional dimensions (about 50m high, 45m long and 22 wide) and abandoning columns.
Wanted by Napoleon in 1806, the Arc de Triomphe was inaugurated in 1836 by French king, Louis-Philippe, who dedicated it to the armies of the Revolution and the Empire. The Unknown Soldier was buried at the base of the arch in 1921. The flame of remembrance is rekindled every day at 18:30.
From Arc de Triomphe we strolled down Champs-Élysées towards Place de la Concorde. I had a place with macarons(Ladurée) saved but it was too popular and everyone was queueing in front of the shop, therefore we went to another one I had saved (PIERRE HERMÉ PARIS). Only later we found out both have multiple shops across the city.
After the macarons break we headed towards Seine, to walk on the promenade towards Eiffel Tower.My brother saw on a youtube video the most instagramable spots in Paris and that's how he learned that Rue de l'Université offers the most beautiful view of Eiffel Tower and it's quieter because not everyone knows about it.

And speaking of dinner, we went to a restaurant in the area (Restaurant Le Beaujolais). We liked the atmosphere, the food was delicious, the service impeccable. After a proper dinner, French way, we continued exploring the area around Eiffel Tower. 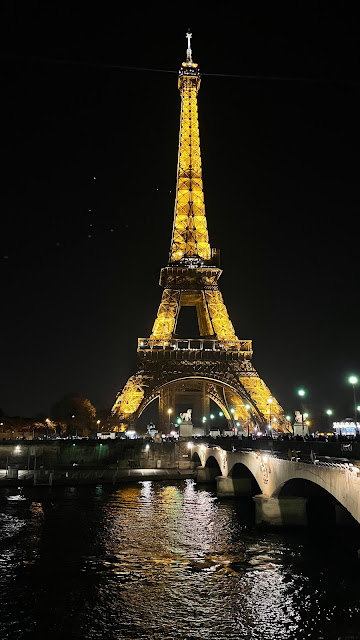 From the other bank of Seine, Eiffel Tower can be seen in its majestic grandeur.
The next day, was my brother's b-day and we had planned to visit Versailles Palace in the afternoon and in the evening climb in Eiffel Tower.
After breakfast/brunch at one of the restaurants mentioned in the beginning, we headed to take the RER (train) to Versailles.
To get to Versailles we took a RER going in the direction Versailles Château Rive Gauche. For getting around in the city we bought 10 t+ tickets. More info how to use it and how much it costs you can find on the official RATP website.
We bought tickets online and that saved us from queueing again. Entrance to Versailles is free for under 18 (or under 26 residing in the EU). That's not the case for me or my brother.
Using the Palace of Versailles app we followed the free tours of the state apartments.

The Queen's Apartments are a series of rooms whose layout is identical to that of the King's State Apartments to the north.

I had for quite a while "War and peace" by Leo Tolstoy and I kept postponing picking it up, until weeks ago and the plot captures exactly this part of the history. It was nice to have also a visual image of the actions described in the book.

Access to the Park and the Gardens is free except on days of fountain shows.

We easily spent a full afternoon on the estate and we didn't visit The estate of Trianon for which we had tickets too.
From Versailles we returned back to Paris the same way we came. For dinner we had cheese gratins.
That day it was my brother's b-day and after dinner we went for a picnic on Seine's bank to pop a champagne!
And the last stop on that day was again to Eiffel Tower, but this time to climb to the top.

At the top, Gustave Eiffel designed a private apartment for himself which can now be explored.
For my last day in Paris (my brother stayed one more day after I left) we went to Louvre museum and spent the rest of the afternoon shopping.
On our way to have breakfast before the visit to the museum, we stumble upon the courtyard of Domaine National du Palais-Royal.
After breakfast, we went directly to Louvre. I don't have to tell you that the museum is gigantic, with so many collections, that more days are necessary to explore it completely. We didn't have that time so we went for one of the trails proposed on the official website of the museum to explore the Louvre's masterpieces. Yes, on this trail we saw Monalisa too :).


This is the biggest painting in Louvre (~70m2). Veronese had the bold idea of transposing a biblical scene to a contemporary setting - a Venetian banquet. Opposite to this painting it's the famous Mona Lisa.

I skipped the queue. To be honest, I find the previous painting more interesting.


After finishing the Masterpieces trail, I quickly took the Journey along the Nile.

After finishing the short visit to Louvre we've done some shopping.
That would be all mes amies! À bientôt!