January 27, 2020
After Phi Phi Islands we went to Kuala Lumpur for three nights, just to taste a little bit the Malay culture. When you have a short time to spend in such a big city you have to dose your energy and time for the most important attractions. I know I will come back to KL so I didn't run to see everything. The next recommendations are not exactly in the chronological order.
I will start with the main symbol of KL: the Petronas Twin towers, which were the tallest buildings in the world from 1998 to 2004.
I think I spent almost half of day walking in the area. At the feet of the Petronas Towers there is Suria KLCC, one of the largest shopping malls in Malaysia, featuring mostly foreign luxury goods and high-street labels.
If you stay late in the evening in the area you might also stay for the Lake Symphony, a magical performance of light, sound and water, at the esplanade outside of Suria KLCC. Checkout https://www.suriaklcc.com.my/attractions-2/esplanade-lake-symphony/ for the showtimes.

Not far from Petronas Towers there is KL Forest Eco Park, a rain forest right in the middle of KL. Considered the "Green Lung" for the city, it offers several nature trails and a forest canopy walk. The entrance ticket is 40MYR (~9EUR).
Surprisingly, the forest doesn't have many visitors, so you can enjoy a photoshoot without any tourists in the background. 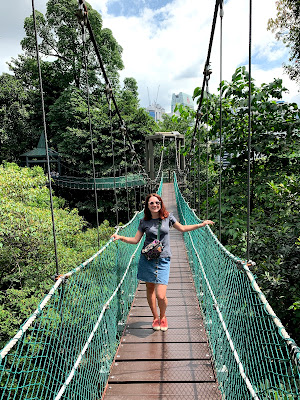 30 minutes by train from KL Sentral are Batu caves. I heard it's a must to visit but to be honest I wouldn't recommend it. Although, the steep stairs are a good workout. At the top there is a Hindu temple. And that's all. Apparently the Dark cave is closed until further notice. The entrance to the Hindu temple is free.
Returning back to the city, Sultan Abdul Samad Building is quite imposing and it's interesting to see how this historic building is integrated with the other modern skyscrapers of the area.
Islam is the official religion of Malaysia, with 60% of its people practicing the ancient belief. The Islamic Art Museum gives a fascinating insight into this religion, and offers engaging information on the art which flourishes from it. The entrance fee is 14MYR and you get a voucher for a free drink at the museum restaurant. I easily spent 2h admiring the 12 galleries set over two floors. And in the vicinity of the museum there is Perdana Botanical Garden, the first urban park ever to be constructed in Kuala Lumpur.
After so many activities it is time to change the subject to food. In the first night in KL we went in Chinatown where we tried some local street food. I was starving after spending ~12h on boat, Grabs and plane.
In the following evenings we tried some food courts. I wouldn't recommend Food Republic@Pavilion Kuala. The food was ok, but nothing spectacular. Instead, I would recommend Lot 10 Hutong Food Court, where we went in the last evening to taste some Malay dishes, such as Hokkien Mee (noodles in a black sauce of soy and mushroom) or Chili Pan Mee(thicker round noodles, topped with fried anchovies, minced pork and dried chili mix).
Edi had a list with dishes to try there and when we couldn't find one of them at the stalls he went to a security guy who knew exactly to guide us to the right stall.

Another option for finding cheap eats is Jalan Alor night market. We just stroll down the street and tried some deserts and fruits.
For the moment bye bye KL! Yellow Singapore, the last destination from this circuit in Southeast Asia!