November 24, 2019
For the upcoming 5 days, together with a group of three girl-friends, I am discovering a little bit of Moroccan culture. First impression after a 3h30' flight from Amsterdam to Marrakech: authorities well organised. We passed the passport control quickly (this morning it took me more time to go through it in Amsterdam). Next step was to exchange money. The local currency is Dirham (Dh) and it has a parity of 1 EUR to ~10Dh. Surprisingly, the exchange rate in the airport is better than the one from Revolut. At the exit of the airport, Hassan was waiting for us to take us to the riad where we are spending the next two nights.
A riad is a traditional Moroccan house with interior garden around a fountain. From outside it looks shady but once you step inside it feels like you are in a different world. Like the quote says: don't judge a book by its cover! It applies to people also. It's so easy to judge something or someone. I am struggling to fight against this instinct but I don't manage it always. Damn brain! Why do you need to fill in the blanks for us?!
The riad where we are staying is situated in medina of Marrakech, the old walled part of the city, therefore most of the streets are narrow and everything looks like a maze.
After we left our luggages in the rooms we went strolling down the web of streets branching off Djemaa el-Fna, the main pulse of Marrakech. Expect strong smells, not everywhere smells like aromatherapy essential oils.

One thing I dislike is the way people approach you. They don't leave room for you choosing a product or service. We stopped at a fruit stall to buy some fresh juice and a woman grabs my hand and starts to draw me a henna tatto. I froze. I didn't know how to react. How to stop her?! When she finished she asked me to pay her. Luckily, one of my friends stepped in and helped me to haggle to pay just 100DH (~10EUR). It's funny how I was telling the girls earlier that I wanted a henna tatto, but maybe I don't have time to do one (last time I had one it took ~2h to do it), and now it took less than 5 minutes to get it. Lessons learned: 1. be careful what you wish for and 2. as a woman walk with your hands in your pockets.
After the story with the henna tatto we went to have lunch. If there was something I didn't have doubts about, was the food, which is flavorous. First Moroccan dish we tried was tagine, slow-cooked savoury stew cooked in pottery pot. The name is after the pot in which is cooked. The cafe-restaurant was recommended to us from the riad where we are staying and it is called Café Des Épices.
After lunch we continued strolling down the alleyways of old town souk. I was again surprised to find so many beautiful handcrafted accessories. Once again my judgements were about to ruin this distinctive experience.

I am not an impulsive shopper but I don't know what charm Marrakech has put on me but I want to go back with a lot of goodies.
One of the girls from the group has been in Morocco many times and she recommended to see Le Jardin Secret as an alternative for the more touristic and expensive attraction of Jardin Majorelle. The entrance fee is 95DH and includes the tower tour. We arrived there 1-1.5h before closing and it was purrfect. We were one of the last visitors. 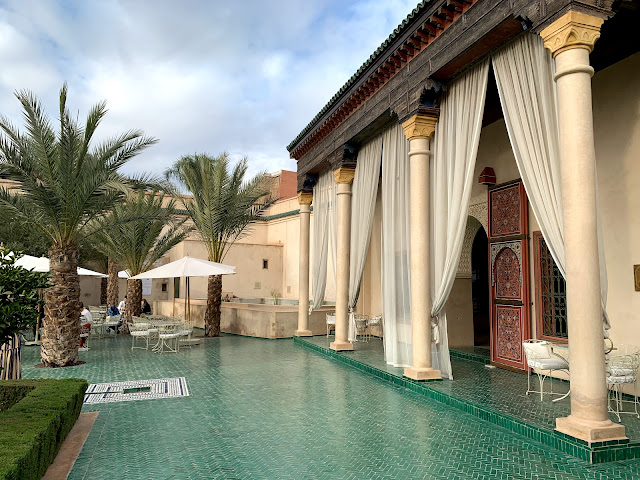 The complex consists of two gardens, an exotic one and an Islamic one.
In the heart of the Islamic garden there is a spring. 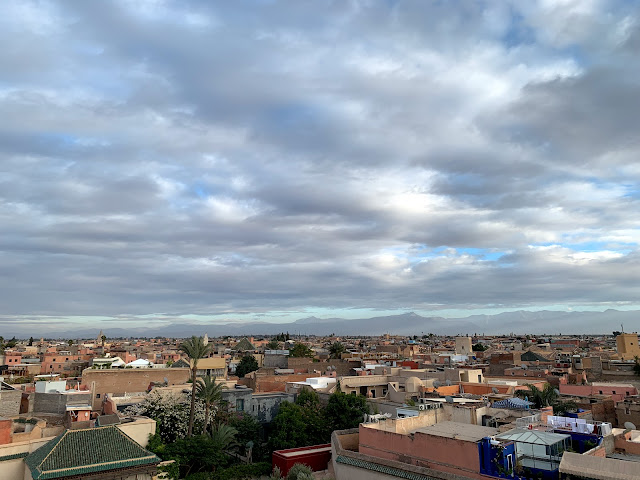 The tower offers matchless views of the medina and the surroundings. In the background are the Atlas mountains. 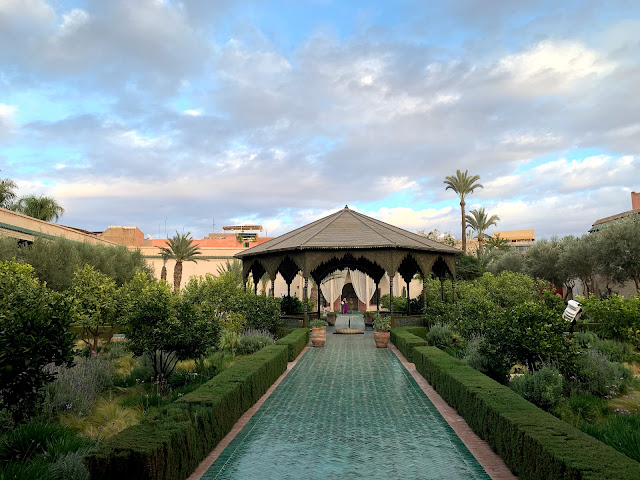 This is a good place to hide from the busy streets of Marrakech. It invites you to calm down and meditate.
By the time we left the secret garden the sun was already set and we went to Argana, a cafe recommended by Hassan, with cozy terrace offering a view of Jemaa el-Fna square.
When the sun goes down the city is transforming. In Jemaa el-Fna are more people trying to sell more things to you and can be too intrusive.
After dinner we returned to our riad. Tomorrow, Hassan has prepared us a surprise trip in the mountains near Marrakech.