November 26, 2019
Hassan is the best guide I have ever met. He managed to offer us some authentic experiences which we wouldn't have had them otherwise. As he says thanks to the life's course we encountered each other.
Thanks to him we had the chance to practice our Spanish. That was the common language we all understand and speak. He came to pick up us from the riad early in the morning. 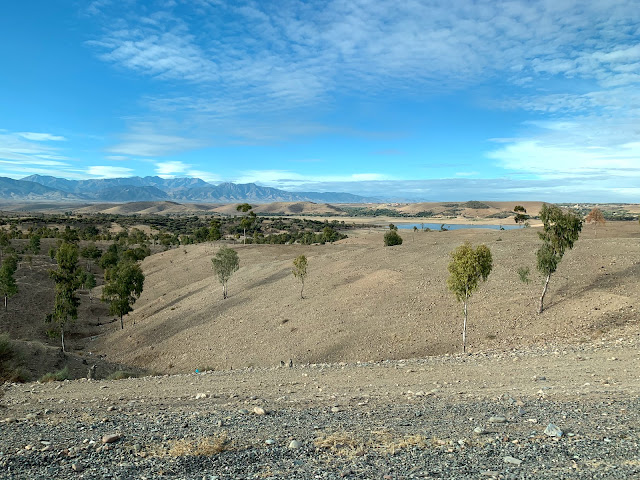 We stopped first to admire the Grand Atlas from faraway.

Then to see closely the dromedaries. He explained that the dromedaries were used by caravans trekking across the desert. Now they are used only for tourism.

After that we went into a village where we could see the simple life of berbers. Berbers are the overwhelming majority of Moroccans and they represent the descendants of pre-Arab inhabitants of North Africa.

The houses are build from abode bricks, with animals living at ground floor and upstairs with the family having a small kitchen with stone oven where they bake the every day bread, a salon to receive the guests, a  small terrace, a small bathroom (I haven't been inside but I imagine it's with minimum conditions), and 1-2 bedrooms.
The people from villages like this one are living from agriculture. With the products they make they go to souks to exchange them for the products they need.
We also learned about the ritual of serving tea. In the Moroccan culture the tea is a symbol of welcoming guests. You start by boiling the water, add some dried green tea leaves and let them stir for a couple of minutes. Then, depending of the season, different medicinal plants and sugar are added. In order to mix the plants and sugar you have to pour at least twice from the pot in a glass and back. Then you are ready to serve it to your guests. The pouring is done from a height of 30cm or more until the glass is half filled. It is considered rude to refuse tea.
We were invited in one of the houses from the village to taste home made butter, bread, olive oil, olives and tea.


For dinner, Hassan arranged to have a feast at riad Sougtani.
Too bad it was raining that evening.