April 09, 2019
A month ago, me and my travel mate, Edi, were looking for a weekend gateway somewhere in the warmer south. But we ended up buying flight tickets to Dublin (it was the best money - time combination). And Edi had the brilliant idea to rent a car to see more than Dublin.
He asked his Irish colleagues for suggestions and that's how we decided to go northern.
Giant's Causeway was the main attraction on Saturday.
This area is part of the UNESCO World Heritage site. Giant's Causeway is famous for the basalt columns, resulted from an ancient volcanic fissure eruption. From Dublin it's about 3h driving.
When we arrived at Giant's Causeway was already 4.30pm. Thanks to the daylight saving time we had plenty of time to wander around.
Warning! The images you will see will make you want to book your next flight to Ireland! 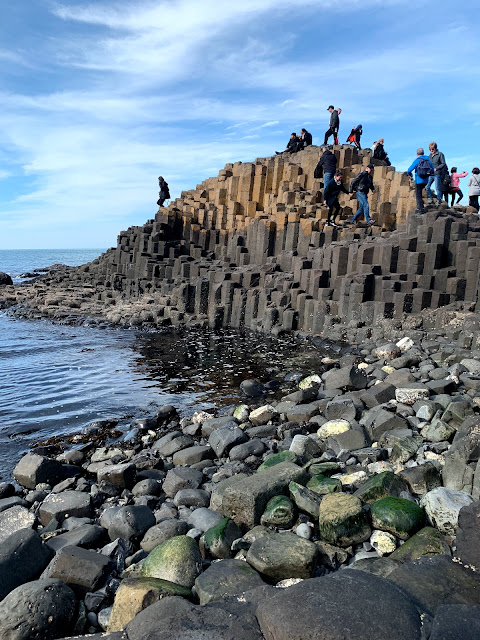 How powerful is the nature! How symmetrical it shaped the columns! I am astonished in front of this natural wonder!

I liked this area because it was quiet. Less people adventured here. I could hear my thoughts with the waves and tweets in the background.

From here there are two trails, each one with different landscape.
Because we didn't know where would we be at the end of the day, we decided to find accommodation on the spot and that's how we ended up in Bushmills, a village famous for the world's oldest whiskey distillery. The owner of the inn where we stayed over night, recommended us a nice place to dine, one mile way from the property. Couldn't find a better place to enjoy the sunset.

Portballintrae is the name of the village where the picture was taken.
On Sunday morning we woke up early and were delighted with a breakfast cooked by the inn's owner himself. He suggested us some places to explore on the coast, part of Causeway Coastal Route, including some spots where Game of Thrones scenes were filmed. He also bragged that some GoT crew members stayed at his property.
A first, short stop at Dunluce castle, depicted in the photo below. We just took some photos from outside and continued our trip.
Our next stop was Ballintoy harbour, scenery of season 6 of GoT.
From this harbour we drove to Carrick-a-Rede, a rope bridge spanning over North Atlantic from mainland to a small island. It sounded very adventurous and with many people in the equation we decided to skip it, and instead wandered a little bit around.
From here we headed towards The Dark Hedges, also known for the King's Road from GoT. The road is closed for cars.


After a walk on this scenery we had the last stop on the coast.
And two hours later we were in Dublin. There we booked accommodation in a house built in 1830.
I've noticed in the city that all doors are colourful.

The rest of the evening we wandered around the city.

Monday morning we woke up early to return the car.
Because it was rainy we spent the rest of the day in the National Gallery of Ireland, which has free entrance, same as the four sites of National Museum of Ireland. The museum is big and we didn't manage to see it all in almost 3h. Now lets delight with some fine art, both Irish and European.

Usually I find difficult fighting against FOMO (Fear of Missing Out) things in a new city, but this time I am content with what I've seen. Dublin was too loudly compared with the northern countryside.
Can't wait to return to this island to explore the other coastal scenes!