It took me a few time to get used with the temperature, but after that I forgot it was cold. I had set in mind to see the canals. I came here for that. I read some articles about this and I was impressed. It's said that it has more than Venice or Amsterdam. From what I've seen, it looks a lot with both of them, but on a different scale. If in the two cities mentioned the buildings are not so tall, here we find massive constructions.

#wanderlust #urbanphotography #enthusiastictraveller
A post shared by Madalina G. (@gmadalina92) on Nov 26, 2017 at 2:40am PST

All over the city you can spot Wasserträeger statues. Wasserträeger (in en. carrying water) was a popular profession that existed before the advent of centralized water supply systems. In Hamburg one of these Wasserträger, originally born as Johann Heinrich Bentz on January 21st, 1787, became a symbolic figure for the city. His nickname was Hummel, but it's not known precisely how he got it. The story says that kids made fun of him by yelling at him 'Hummel, Hummel' as they saw him passing with his filled buckets. Some of them even showed him their naked butts, well-knowing that 'Hummel' couldn't chase them with his heavy buckets. Therefore, he just replied by yelling back 'Mors, Mors!' which means 'Kiss my ass!' in a local dialect. Since then, the phrase 'Hummel, Hummel!' 'Mors, Mors!' has been a popular salute in Hamburg. 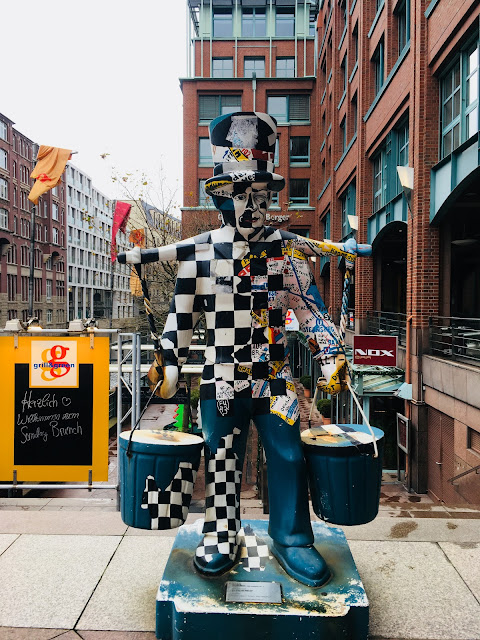 Another story about people of Hamburg, is the story of Henriette Johanne Marie Müller, called Zitronenjette. This woman made a living by selling lemons. Her famous call while she sold lemons was Zitroon! Zitroon!. At her memorial it's stated: "Your life was as sour as lemons; shall remembrance on you would it be worth? Your destiny is pointing to all the people for whom happiness has no time."

Remaining in the history area, let's have a look at the five Hauptkirchen of Hamburg. Since I've got off the train, I saw some towers touching the sky. Wondering around, I got to one of them, the tower of St. Michaelis's church. In the morning there was very crowded so I didn't stay in the line, but in the afternoon the rain brought me again to this place. I was going to ask how tight are the stairs to climb the tower, but my brain was frozen. I went straight to it. It was ok, nothing compared to the experience from St. Peter's basilica. The tower offers you a panoramic view over the whole city.
In the picture below, the tallest towers that you see are as following: in the center is St. Nikolai church, in the right is St. Katharinen, and in the left, from front to back is St. Petri and St. Jakobi.

I end up this day with a walk in Speicherstadt, the warehouse district. In the twilight the redness of the buildings is enhanced. The brick architecture flourished in Hamburg in 1920. Brick was viewed by builders and their architects as a more effective and durable material in the rough climate of the north. What decides the brick's incomparable play of red, yellow is the firing process.


I feel Hamburg has more to offer to the explorer's eye, that's why I'm delighted to accept this invite in the near future.