It all started few months ago, when Depeche Mode announced they will play in Cluj. I missed them last time when they were in Bucharest and I was determined not to miss them again. From curiosity, I've checked were else they will be playing and from all cities, Lisbon appeared highlighted in my eyes. I wanted to go to Lisbon for quite a while. This is how I learnt about the NOS Alive festival. Meanwhile, I discovered other bands from the lineup: The XX, Alt-J, Bonobo, Glass Animals. In the end I bought a 3-day ticket.

I flew to Lisbon with Tap Portugal and I was impressed they were offering pillows and blankets to all passengers for a more comfortable flight. As I arrived early in the morning, I had a few hours to explore the surrounding area before check in at the hotel. At the first sight, I was a little bit disappointed. I had in mind a different image. I found old buildings and deteriorated. The colored tiles are making them look a little bit nicer.
These tiles have a name, azulejos and date back from 15th century.


There are a lot of funiculars. I didn't took any. I preferred to climb or to descend the slopes by foot. I like challenges and it was not easy to go down or up on these streets. I wore sandals and they were slipping on the pavement.

After walking like this for a few hours, I went to check-in and have some rest before going to the festival. The night before I didn't sleep too much and I needed a power nap.

It was not a good idea to get to the festival venue by bus. It took me too much, due to traffic jam. The next days I went by metro and train.

Unfortunately, I missed Alt-J because I got late and the queue to enter the festival was big. Oh my God! So many people. I was a little bit overwhelmed by such crowd. I stayed for The XX, The Weekend and Bonobo concerts. I really enjoyed their live performance, but I like more to listen their music while relaxing at home or while focusing at work.

After a few hours of sleep I woke up more enthusiastic, eager to see what other gems are hidden out there. My algorithm was very simple, I was choosing something that looked interesting near me and went that way, and so on.

Yes. Those are ducks and chickens. This image led me to the legend of the Rooster of Barcelos. The legend tells the story of a dead rooster's miraculous intervention in proving the innocence of a man who had been falsely accused and sentenced to death. Therefore, the rooster became one of the symbols of Portugal.
My first objective was to get to one of the many viewpoints from where you can enjoy the panoramic view.

The view was worth all the effort. And I didn't stop here. I wanted to see more.

Once again the view didn't disappoint me. On the left side of the photo it's Castelo de S. Jorge, which became my next target.


I started to get used with the local flavor. Lisbon does not impress the eye through grandeur. No, what makes it beautiful is the deteriorated aspect.
I spent a few hours at the castle. The fortification is very impressive and massive. The castle was built in the mid-11th century, during the Moorish period. It was used for military purposes. Eleven towers still remain.

I left behind the castle and went downhill towards Tagus river.


Yes. The color is not green. Vinho Verde is a Portuguese wine that originated in the historic Minho province in the far north of the country. The name literally means "green wine," but translates as "young wine". It may be red, white, rosé and it's sligthly sparkling.

My day through Lisbon ends here. The night continued with Foo Fighters and Parov Stelar playing at the festival. That was the longest night. I went back to the hotel at 5.30am.

Day 3 - Chilling at the beach

The day before was very exhausting, so I decided to cool down a little bit. Cristina suggested me to try one of the urban beaches near Lisbon. The clouds didn't scare me and I took the first train to Estoril.
On my way to the train station I came across a flea market with handmade jewelries. It took me ~40 minutes to get to Estoril by train.

The water was too cold to swim, but I enjoyed the sunbath.

I chose to spend my last day in Sintra and Cascais. I started with Sintra. There are a lot of mystic places to visit in Sintra, castles, gardens. I chose to do Pena circuit which included Castelo dos Mouros and Parque e Palácio Nacional da Pena. There are two options to get uphill: hiking or taking a touristic bus. Because I didn't have too much time at my disposal, I chose the second option. I would have preferred the first one. I want to get back there for a couple of days to hike and explore all  pastel-colored villas and palaces.


The grounds surrounding the palace are amazing and have a lot of mysterious paths. I would enjoy a treasure hunt there. I didn't dislike the sunny day but I bet a cloudy day makes this place more enchanting. From Sintra I headed to Cascais with one stop in Cabo da Roca, westernmost point of mainland Europe.


From Cabo da Roca I continued the trip to Cascais where I stopped for a walk on the seafront. 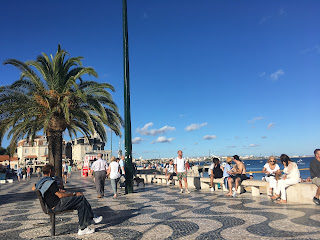 All the commute extenuated me but it was worth it! I would do it again, the festival, discovering the city and surroundings, maybe accompanied next time!