Budapest - Pearl of the Danube

June 06, 2017
The journey begins with an unexpected and pleasant meeting with a friend from university. She and her friend were also going to Budapest. Hurray! I will have some company in this foreign and mysterious city.
It's the first time I travel with a twin-engine turboprop short-haul regional airliner (ATR 42-500). It's the smallest plane I have flown with. That's why the flight is taking more, the maximum speed is 500km/h, and highest altitude ~6000m. The landing was weird. Well.. We've landed safe and sound. 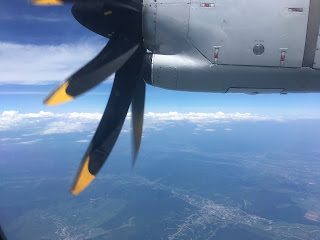 To get in the city there is one bus (200E) with connection to metro line M3. The ticket is 350HUF (1.15€).
I went to do the check in and after that I met with Alexandra and Mădălina near the city center to have lunch.
Sometimes it happens to have in mind an image about the food you order and when they bring you the plate you are disappointed about the look and taste. This happened to me when I ordered paprika chicken with noodles. Well.. It happens. 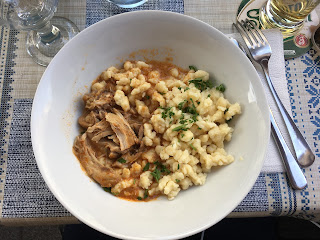 Afterwards followed a walk on Danube's banks. We crossed Elisabeth bridge on Buda side. From there you have a nice view over Pasta side, with the Parliament building.
We crossed back the  Margit Had bridge to get to Pesta side.
The day ended with an ice-cream in the square in front of St. Stephen's Basilica.

The next day I was alone. I wanted to go to the thermal  baths. I chose Széchenyi Thermal Bath which is the oldest one from Budapest. Again I was a little bit disappointed. I was expecting a different experience.


Short pause. I'm currently reading The Art of Traveling by Alain de Botton which starts with this observation, you might be very excited about a journey, and picture some images of that place but when you're there you see other elements that might ruin your dream. I didn't get very far with the reading but this applies well in my case too.Back to Budapest, usually I do not use public transportation when I travel because I want to discover the city at my pace. This time I used a lot the bus from different reasons: it was very hot and the buses have air conditioning, the tickets are cheap ( I bought a 10 pack with 3000HUF = 10€), the distances between spots are quite big.
From the thermal bath I headed to Margaret Island, a big park with roses, a perfect place to lay down in the grass and enjoy the sun and silence.


After resting a little bit I started to climb the Castle hill. There is a say that Walt Disney got inspired by Fisherman's bastion since it resembles the symbol of Disney castle. From there the view over Pesta side is breathtaking. I aim up so I headed to Buda castle, another impressive symbol of the city. 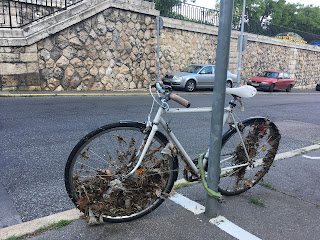 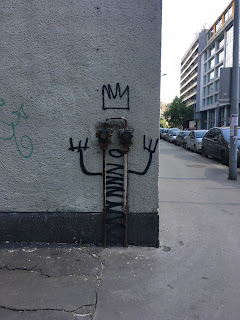 From Buda castle I went back to the hotel because I was running out of battery. I rested a little bit in the room and then went out to experience the night life of the city. I talked with the girls to meet but I was too slow to catch them and they were too tired to wait for me. I didn't want to end the day so early and I decided to find a place to eat something and have a drink in one of the famous ruin pubs. There is a square with a pool in the middle and a lot of people were hanging out, having a beer. I grabbed something to eat from one of the trucks parked near and enjoyed it there. Later I had a beer in a bar and enjoyed the second half of the final match of  Europa league.


On Sunday I talked with the girls to meet on Dock 7 to buy tickets for a night cruise on Danube (5500 HUF = 18€, 1h cruise with one drink included). From there we headed to Citadela. If the view from Castle hill is awesome, from the citadela is more amazing. The climbing was worth the effort. 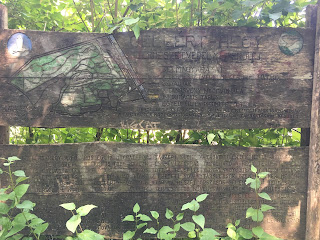 Here ends my journey in Budapest, Pearl of Danube. Some final remarks:

- if you plan to have a bachelor or bachelorette party this is the place you are looking (I've seen a lot of parties this weekend  day or night)
- in many places you can pay with card, cash with HUF and EUR
- from now on the smell of blossomed linden will remind me of Budapest
- for breakfast I went to this cool place London Coffee Society