The alarm rang at 7:50am. Crap.. At 8:30am I have to meet with Alex and Iuliana to go to Dinant. I was pretty sure I set up the alarm to wake me up one hour earlier, to have enough time to go through my morning routine. Well.. yeah, the Belgian beers are very dangerous if consumed one night before.

I was super quick. I skipped my yoga session and managed to get in time. I also had time for breakfast.
From "The hotel", we took the metro to Gare du Midi to take an IC train to Dinant. We bought the tickets and had 10 minutes to grab a cup of coffee before departure. Funny thing about coffee: in Belgium, people say to cappuccino: "kappu".
Dinant is a city in Walloon Region, in south of Belgium. The journey with the train from Brussels takes almost 2h. There is one thing I like about travelling with the train in Belgium: no matter the distance you pay the same price and during the weekend there is a special price for return trip in the same weekend, only 14 euro.
I tried to read a little bit in the train, but the sightseeing was more fascinating. The weather was so nice, sunny, no clouds, warm.

From the train station we went directly to Grotte La Merveilleuse. We just missed the tour from that hour. Bad timing. We asked for the schedule of the next tours to see how we arrange to see the other places. The tour of the cave starts every hour and takes one hour. Purrfect! Meanwhile we went to visit the Citadelle de Dinant.
On our way to the Citadelle some interesting views:

There are two options to go to the Citadelle:

Second option, please! The ticket was 14 euro and included a cruise with the boat on Meuse. The view from upstairs:
Impresive, I would say!
Now getting more serious, we entered the fortress. Once you are inside, you feel like you are back in time, 100 years ago. The information is well structured. You find short histories written on the walls, the most important dates during the first world war. Short story: Belgium was neutral during the war, the Germans wanted to attack the French before attacking Russia. They attacked the French through Dinant. A lot of soldiers died during the battle. Dinant inhabitants were slaughtered by Germans. All this happened in August 1914.

At descent we took the stairs. 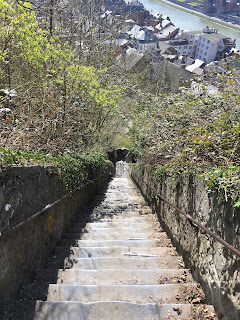 A moment to breathe in:


I had a revelation while drinking the beer and admiring the glass. When I will go back home I will try to draw all the glasses of the beers I have tried so far.
The service at the restaurant was slow and we've almost missed the tour at the cave. We hurried up to catch it.
Grotte La Merveilleuse is quite stunning. It's private. I've never heard of someone to own a cave. It's on three levels. The first two are accessible for visiting, the third one is flooded and can be seen from the second level. There is a rock which has moss, very unusual in a cave, but possible due to artificial light from spotlights and humidity. It also has some tunnels dug by humans in 1937. These tunnels sheltered 300 people during 10 days at the end of WW2. Below some pictures from inside:


If it weren't enough the stairs from the citadel, wait for the stairs to climb out from the cave. At the end there is a surprise!
From the cave we headed to the pontoon to take the boat cruise.
View on the right bank of the Meuse: 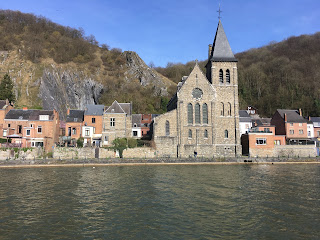 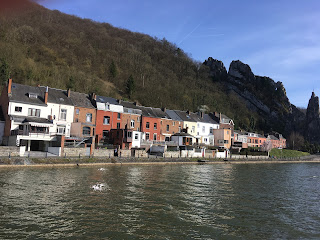 View on the left bank of the Meuse 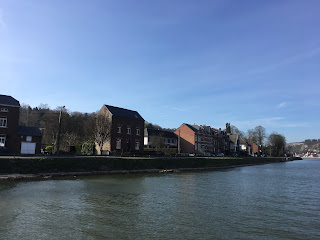 Believe it or not after the cruise it was already evening and we had to go back to Brussels. We didn't have time to check the Saxhaus, the museum paying tribute to Adolphe Sax, the inventor of saxophone.